During 4 months, a team of researchers and civil society experts on disinformation, foreign interference, election integrity and digital regulation came together in the Online Election Integrity Watch Group.

Read the full report : in English – In French

On 10 and 24 April 2022, French voters went to the polls to elect the President of the Republic for the next five years. On 12 and 19 June they returned to the ballot box to elect their representatives to the National Assembly. Campaigning in the run-up to these two major elections was disrupted by a unique set of domestic and geopolitical circumstances, with the handling of the COVID-19 pandemic and the war in Ukraine both taking the focus away from discussion of the candidates’ policies. The presidential election was also characterised by the further collapse of the traditional parties – the Parti Socialiste (Socialist Party, PS) and Les Républicains (the Republicans, LR) – an uneasy alliance between the left-wing candidates, the rise of two far-right candidates, and Emmanuel Macron’s heavily criticised late entry into the campaign, followed by clear discontent with his leadership among part of the country.

The legislative elections in June were presented as a ‘third round’, particularly by the left, with many hoping that the alliance that formed after the second round of the presidential election between the Green Party, the PS and La France Insoumise (France Unbowed, LFI), whose candidate Jean-Luc Mélenchon received almost 22% of the votes in the first round), under the name of the Nouvelle Union Populaire, Écologique et Sociales (New Popular, Environmental and Social Alliance, NUPES), would act as a counterweight to the power held by Macron following his re-election. This was seen at the ballot box: the significant success of NUPES (131 seats), the historic breakthrough of the right-wing Rassemblement National (National Rally, RN) (which went from 8 to 89 seats) and the decline of LR (61 seats) took Macron’s party (245 seats) by surprise. The extraordinary failure of the French government to win an absolute majority in the National Assembly has plunged the country into an institutional and political crisis: France has become largely ungovernable due to the rise of opposition parties and their candidates from the extremes of the political spectrum.

The information system put to the test

These turbulent democratic events were fertile ground for the kinds of online influence operations by domestic and foreign actors that had been seen during the 2017 French presidential election, the 2016 Brexit referendum, the 2016 (and, to a lesser extent, 2020) US elections and the 2021 German federal elections. We therefore gathered a group of researchers from civil society to conduct real-time monitoring of content circulating online. This group brought together a range of experts to monitor the emergence and circulation of disinformation in the media and on social networks, of hate speech linked to political parties and candidates, and political ads related to the election included in the Meta library. It also measured the algorithmic amplification of the candidates on the major online platforms. Inspired by the Election Integrity Partnership in the United States, and in the wake of the Les Lumières à l’ère numérique report submitted to the President of the Republic in January 2022, this group sought to alert the public authorities, media and citizens to online information manipulation campaigns that might undermine the fairness of the election.

We observed a great deal of troubling content and behaviour online. Much of this sought to undermine the legitimacy of the outcome, for example by questioning the validity of the opinion polls conducted during the campaign or of the vote count after each round of the presidential election. We also observed online mobilisation strategies that violated the online platforms’ terms of use, such as astroturfing campaigns and examples of coordinated inauthentic behaviour led by the far right, or were on the fringes of the French Electoral Code, such as the ads for various parties observed online. These narratives and strategies are embedded in the contemporary political landscape. They are constantly evolving, will change with future regulations and will always require special focus during major democratic events.

In 2022, however, the attempts at destabilisation we analysed had a limited impact. This is a positive finding for the democratic process in France, but calls for great caution in the future.

We propose four main hypotheses to explain the relative resistance of the French information ecosystem during the 2022 presidential and legislative elections. First, the war in Ukraine led to a redeployment of the resources of Russia, one of the main actors of foreign interference in the West. The ban on the Russian state-controlled media Sputnik and Russia Today (RT) from the major online platforms, and their focus on narratives to justify the war in Ukraine, weakened the ability of these outlets to influence people in France and diverted their attention from the French presidential campaign.

Second, government action on disinformation may have encouraged online platforms to be more vigilant, and discouraged malicious actors from taking part in online influence operations. During these elections, France held the presidency of the Council of the European Union at the decisive moment of finalising the Digital Services Act (DSA): the EU legislation setting out the responsibility of online platforms with regard to illegal and problematic content. This made it a sensitive topic for the major online platforms set to be regulated by the legislation in future. The French government also launched the Service de Vigilance et de Protection Contre les Ingérences Numériques Étrangères (Vigilance and Protection against Foreign Digital Interference Agency, Viginum) in the run-up to the presidential election, while France’s media regulator, the Autorité de Régulation de la Communication Audiovisuelle et Numérique (Audiovisual and Digital Communications Regulatory Authority, Arcom) raised awareness among candidates, political parties, the media and social networks of their shared accountability for disinformation. This demonstrated a determination on the part of French institutions to tackle this issue.

Certain specific features of the way in which French elections are conducted and regulated also make it more difficult to spread disinformation on a massive scale, and support a certain political ethics. Several elements contributed to making it more difficult for narratives that challenged the legitimacy of the election to succeed. These included the fact that various political figures lent their support to the candidates who were highest in the opinion polls in order to obtain the necessary parrainages (signatures) to run in the election, even if they were opposed politically; the lack of remote voting; France’s extensive network of polling stations; and the regulation of political advertising during the campaign.

Finally, the large-scale circulation of disinformation was limited by the relatively centralized nature of the French media space, in which the traditional media still largely control the agenda, and have a shared view of the importance of respect for institutions. This respect for institutions was also evident across the spectrum of presidential candidates, none of whom questioned the validity of the election results, despite expressing dissatisfaction with them. The sole notable exception was Manuel Bompard, a candidate for LFI in the legislative elections who called into question the way in which votes for NUPES were counted for the overseas territories and accused the interior minister of manipulation. As we will explore below, however, the centralized nature of the French media has itself been criticized by far-left and far-right movements, raising questions about its sustainability.

Undermining institutions: a tangible threat for the foreseeable future

The numerous attempts to challenge the legitimacy of the democratic process or the opinion polls did not therefore have the anticipated effect. We must, however, recognize the threat that they pose for the future. The narratives of the traditional and centrist candidates seem to be on the way out (as demonstrated by their difficulty gaining traction online, compared to the high visibility of extremist views), while communities opposed to institutions and mainstream politics are being established and developed. Their rise on social media is undeniable, and reflects a widespread distrust in government and in institutional narratives.

Our report concludes by proposing a number of technical recommendations designed to safeguard the French online information ecosystem. While these will undoubtedly restrict the ability of malicious actors to destabilize the institutional processes on which democracy is based, they will not prevent anti-system narratives from gaining ground, and are no substitute for the necessary political and ideological debates that lie ahead.

Check First is proud member of the Digital Vigilance and Electoral Integrity Group (GVNIE), formed to anticipate harmful actions affecting the integrity of the vote in order to better understand them. Check First took part in the analysis of political advertising using its tool 22vlalapub.fr, which monitored them during the 2022 French Presidential elections. We will released a report focusing on 22vlalapub.fr and political advertising soon. 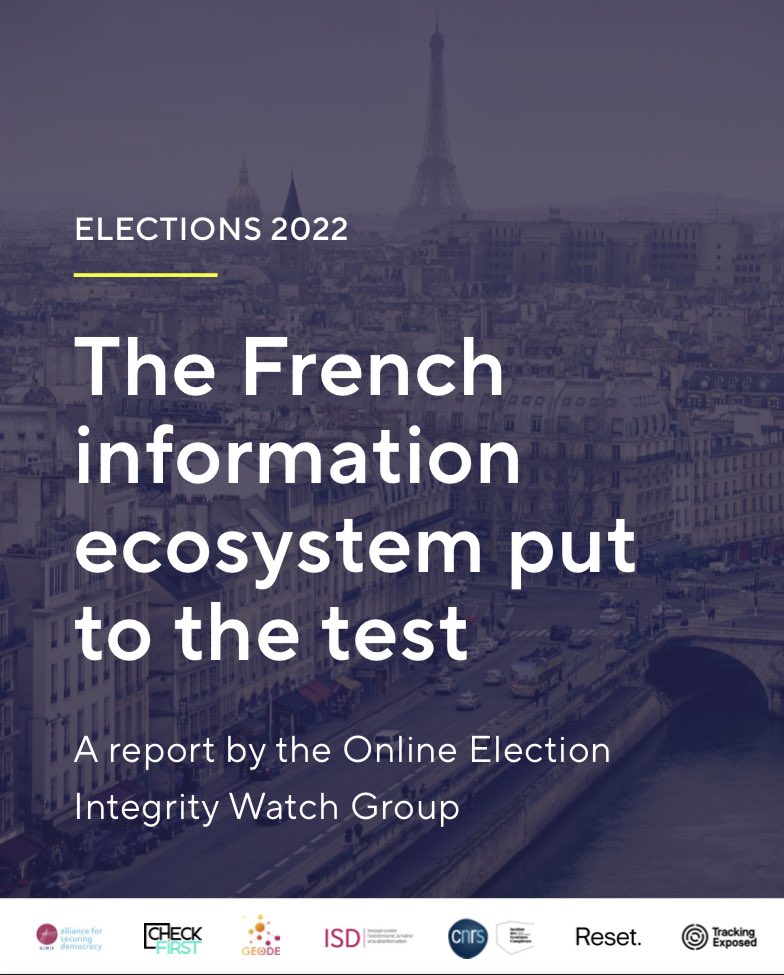 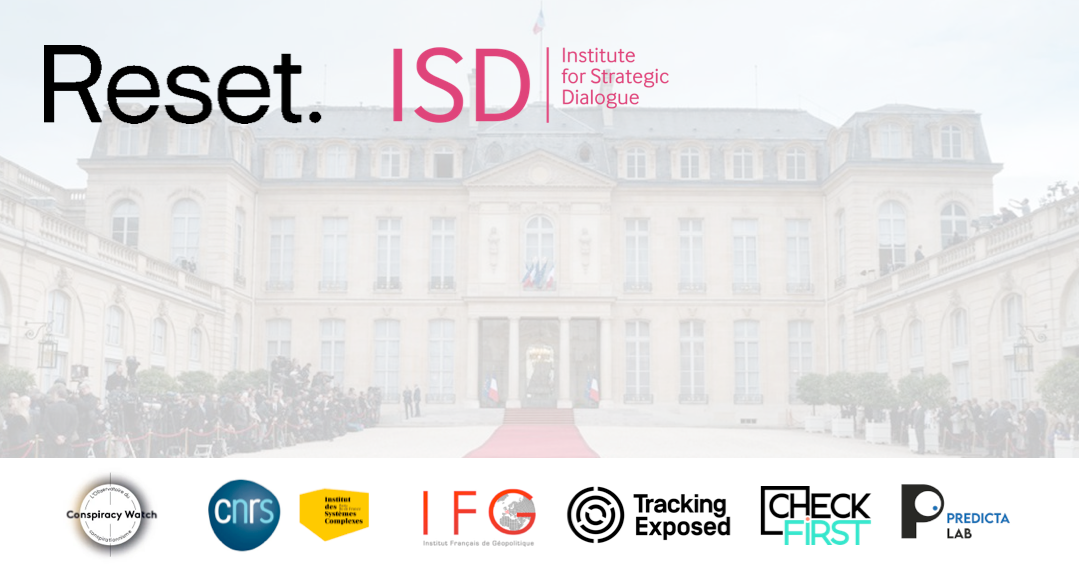 We, researchers and civil society experts on disinformation, foreign interference, election integrity and digital regulation, we come together in the Digital Election Integrity Watch Group.

“We should work together for good and found a company!”. The exclamation came in between three people who hadn’t met in real life yet, but had spent countless hours fighting disinformation about COVID together during the first wave of the global pandemic.

Mastodon, the rise of the Fediverse

Mastodon, Fediverse, do you already feel lost just by using those 2 words which aren’t quite as new as you’d think? … Flashback